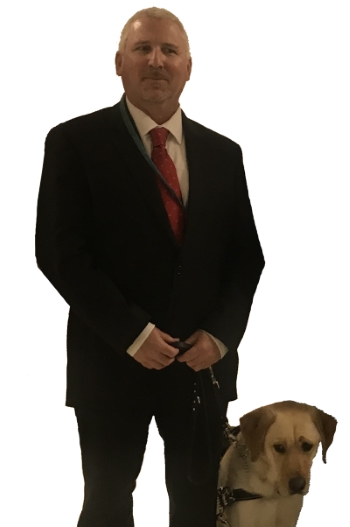 As one of the one in 4000 people worldwide with Retinitis Pigmentosa, I am often asked “What is it like to have RP and how much vision do you actually have?”

My response to the last half of that question is an easy one — just enough vision to get myself into trouble!  My answer to the first part is a bit more complex. Retinitis Pigmentosa, also known as RP, is an inherited disease that causes retinal degeneration.  The retina is a thin piece of light-sensitive tissue lining the back of the eye.  Its job is to capture and convert light into electrical signals that the brain interprets as vision.  People with RP experience a gradual decline in their vision as the photoreceptor cells in the retina progressively degenerate.

When first diagnosed at age 19, I was naively unaware of what it meant to have an incurable hereditary eye disease or how profoundly life as I knew it was going to change.  It was not until my mid-twenties that I began noticing the change in my peripheral vision.  Having no prior frame of reference of what blindness actually was, I would often experience a sense of surprise when I began “accidently” walking directly into planters or bumped into a bench that was out of my decreasing field of vision.  I learned to cope by walking with my head down.  Aside from the occasional bumps and bruises I acquire during these types of encounters, there is no other physical pain associated with RP.

The common symptoms of RP include difficulty seeing at night and a loss of peripheral vision.  In most forms of RP, rods are affected first.  Because rods are concentrated in the outer portions of the retina and are triggered by dim light, their degeneration affects peripheral and night vision.  By my late twenties, I could not see in the dark, I was having issues with bright lights and everything became a world of fog.  When the disease progresses, and cones become affected, visual acuity, color perception, and central vision are diminished.

At the age of 27, I had to surrender my driver’s license and inform my employer that I was having problems with my vision.  I can still remember him saying “I wondered why you walked with your eyes down all the time.”  He then promptly reduced my work responsibilities and restricted my duties to the office.

As the disease continue to progress, it impacted nearly all aspects of my life, and just as importantly, the way in which I was perceived by others, and even how I perceived myself. It was at this point that I began to understand what blindness really meant.  And I also understood that it was all on me — that I needed to take personal responsibility for acquiring “blindness skills” in order for me to continue to be defined by both myself and others, not as a blind person, but as a husband, father, son, friend and a valued, competent and capable employee.

Through research and speaking with various organizations such as the Arizona Center for the Blind & Visually Impaired (ACBVI), I determined that the best course of action was to contact the local Vocational Rehabilitation office.  I received training such as how to walk using a cane, how to orientate in my surrounding and how to use a computer with screen magnification and speech output.  Additional support came through tuition reimbursement for earning a bachelor’s degree. In 2000, I graduated from Arizona State University.  During my six years of college, I worked full time and was dealing with total night blindness.  Being an adult student was really hard but being a student with a visual impairment made it even harder.

Optimistic and armed with my degree and blindness skills, I entered the job market. After two years of interviewing, disclosing my disability, not disclosing, using a cane and not using a cane, I was unsuccessful in finding a job.

Although I tried to sell myself as a problem solver and able to allay and overcome any fears my potential employer may have regarding my blindness with both high- or low-tech solutions, I was unable to secure employment.  It was apparent to me that employers were fearful of hiring a “blind person”.   I would not give up.  And finally, in 2004, an employer took a chance on me.

Arizona Industries for the Blind is an inclusive workplace that builds upon each individual’s strengths and capabilities.  AIB fosters a healthy workplace culture that embraces and encourages both professional and personal development.   Most importantly, AIB looked at me first as a competent, capable employee who happened to be blind. AIB has given me the opportunities to excel, where others did not.

You can download a copy of this story here…